Metalworking fluids need to be based on oil with good solubility for additives. Tested under extreme conditions, naphthenic oil proves an excellent replacement for Group I oil.

O nce the obvious choice for metalworking fluids because of their ability to dissolve a necessarily high content of additives, Group I oils are disappearing from the market. Naphthenic oils also display very good solubility for additives. However, are such oils really as good as the ones they are going to replace? Nynas decided to put this to the test. “Some of our customers had expressed concerns regarding the disappearance of Group I oils and the effect that this could have in formulations with very high concentrations of additives. This prompted us to start a study together with a customer. We wanted to explore the solvency power of different oils for extreme concentrations of additives,” says Dr Luis Bastardo-Zambrano, Manager of the Technical Development and Market Support department atNynas. The study focused on the stability of concentrated solutions of different additives normally used in neat metalworking formulations. Samples were prepared with either a naphthenic oil or a paraffinic oil of different refining degree (Group I, II and III). The results clearly indicated  that factors such as the chemical nature of the additive, the base oil used to dissolve it, and the conditions in which they were stored influenced the behavior of the samples. “We studied the samples over a period of six months. Some seemed fine in the beginning, but started to separate after a few weeks, whilst others remained unchanged over the entire test period. After analyzing all the data, we did identify some clear trends.” In general, the samples based on the naphthenic oil and those based on paraffinic Group I oil retained a more homogenous appearance during the test period. On the other hand, and in general, samples based on the paraffinic Group II and III base oils presented a hazier appearance or had some precipitation. 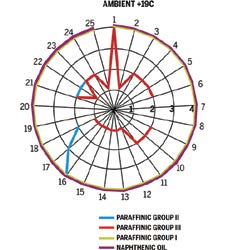 SOLVING THE ADDITIVES FOR METALWORKING

One of the core tasks of the base oil – to deliver solvency even at high additive concentrations – was successfully rated for the different base oils. Data relating to the visual appearance of samples plotted in a graph encompassing the 25-week test period showed the relative stability of the samples. In the graph, numbers along the circumference denote weeks whereas the radial numbering refers to the appearance of the sample, where 1 is hazy and precipitation; 2 is precipitation;  3 is hazy; and 4 is good (no change). The data correspond to the solubility of sulfurized olefins (12%wt) in the different base oils tested.