Türkiye continues to make domestic and international investments in aviation and defence, and this leap is reflected throughout the industry. While the airplanes, helicopters, and unmanned aerial vehicle projects of Turkish Aerospace Industries (TUSAŞ) are a source of pride for Türkiye, they also present companies from various industries with chances for growth and development.

One of the best examples of this development is Koçak Speedol, Turkish lubricant and grease manufacturer. Adding value to the lubricant sector through its competent R&D team, accredited laboratory, and high-tech machine park, Koçak Speedol creates a difference in the defence and aviation industries.

The company produces Speedol Aero Ultra Diesel S170, the first domestic turbodiesel engine oil approved by TEI (TUSAŞ Engine Industries, INC). The product which fulfills the engine oil needs of TUSAŞ ANKA, the unmanned aerial vehicle (UAV) developed in accordance with the needs of the Turkish Armed Forces, meets the demand in the major import item through domestic production. Products under the Speedol brand are listed first among engine and transmission oils in the Aircraft Maintenance Manual (AMM) of the turbodiesel engine. 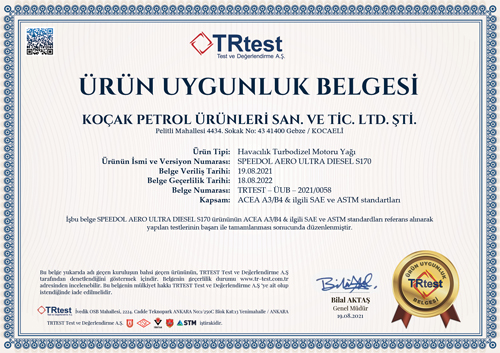 Koçak Grup R&D and Technical Project Manager Ceyhan Çağlar Çapanoğlu expressed her joy at the company’s achievement in the 100th anniversary of the Speedol brand. Çapanoğlu praised the R&D team and all Koçak Grup managers who contributed to the project and stated that she is proud that the transmission fluid group Speedol Aero Trans S170 developed for TEI-PD170, Türkiye’s first national turbodiesel engine, and the engine oil named Speedol Turbo Diesel SP170 developed by TEI’s demand alternatively and authentically, were approved by TEI and mass production has begun.

Çapanoğlu stated that they will expand their substitute product portfolio in the defence and aviation industries in special product groups such as lubricants, greases, deicing and defrosting fluids.

The Excitement for Domestic Production
Informing about the strong production facilities exporting to more than 40 countries and the high-tech machine park, Speedol - Koçak General Manager, Yusuf Koçak adressed the activities of the accredited laboratory and R&D center providing services within the company. Noting that they operate under the motto “Quality provides trust”, Koçak said, “With more than 20 engineers, we offer solutions that fulfill the needs of our government and nation.” 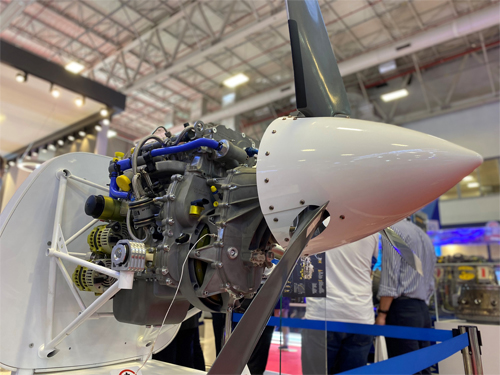 95% Domestic
Within the scope of the Operative UAV Engine Development Project, the first run-up of the TEI-PD170 engine took place on January 30, 2017. The TEI-PD170 engine, whose design is completely national and indigenous, was delivered to TAI (Turkish Aerospace Industries, Inc.) on November 3, 2017, following maturation tests. TEI-PD170, which proceeded to the mass production stage at the end of 8000 hours of calibration and testing activities, successfully performed its first flight with the ANKA platform on 27 December 2018, and its first flight with the AKSUNGUR platform on 4 October 2021.

Compared to the altitude performances of the competitor imported engines from abroad, the TEI-PD170 engine produces 34% more power at the duty altitude, providing an undisputed superiority in the critical altitude/power ratio. The engine is considered the most superior engine in its class with its special twin-turbo design and minimum specific fuel consumption.

With the Full Authority Digital Engine Control (FADEC) and the software thereof, that are manufactured and developed within the bounds of TEI’s possibilities, the TEI-PD170 engine has been developed on the basis of the civil aviation standards and has 45.000 ft. service ceiling. The engine has Engine Control System compatible with MIL-STD-461F, MIL-STD-704F, MIL-STD-810G, calibrated and upgradeable TEI design software and hardware, power increase capacity up to 220+ HP. The production and equipment of the engine, whose design is completely indigenous and national, is over 95% domestic.

TotalEnergies mobile application awarded for the unique experience it offers

TotalEnergies Turkey Pazarlama, which has been operating in lubricants production and marketing industries of Turkey for more than 30 years, continues to offer a unique experience ...

The importance of DGA test in transformer condition

Sustainable lubricants and recycled base oil