Greases are paste-like lubricants that are generally a yield of the reaction between base oils and metal hydroxides with acids and have consistencies ranging from semi-liquid to solid and consist of emulsifying agents determined by the application area.

According to the historical records, around 1400 B.C., Egyptians prepared greases by combining olive oil with lime and used these lubricants in various vehicle wheel journals. The production of sodium (Na) greases started in the 1870s which is followed by the production of aluminum (Al) and calcium (Ca) greases in the 1880s and the lithium and complex soap greases, which rapidly came into wide use, were invented during the World War II. Patents of the first barium (Ba), lithium complex (LiX) and aluminum (Al) soap greases were registered in 1952.

Considering the sales volumes, lower amount of sales compared to other lubricants does not mean that the greases are of poor quality or not as widely used as other lubricants. On the contrary, greases entirely require extensive knowledge, research, R&D and innovation and are harder to produce than other lubricants only because they offer longer lubrication periods and shelf life.

Metal soap greases are the most commonly used grease types (80-85%) in the world. Greases that do not contain metal soaps are usually preferred for more specific sectors and processes. Nowadays, the new technology "Calcium Sulphonate Complex" greases are replacing many other grease types.

What do we expect from modern lubricating greases?

If the sector or process you work in includes;

grease is a must.

How are they obtained?

A metal soap is obtained through a chemical saponification process. A fatty acid reacts with a metal hydroxide. Metal soap and water are released during this reaction process. These two reaction products are both neutral, so this chemical reaction is also called the neutralization reaction. 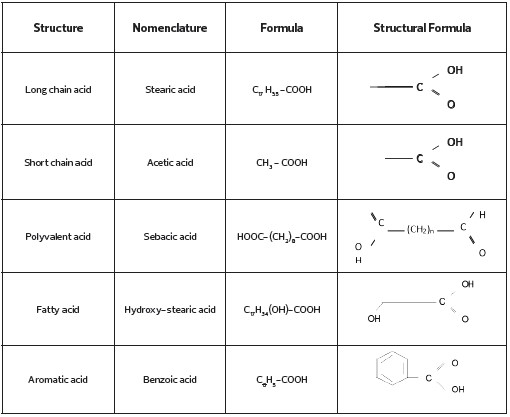 Table 1. Acids used in the reaction

Fatty acids are obtained from animal or vegetable oils by chemical separation (in acid or alkaline medium). In this process, glycerol (multi-bound alcohol) emerges as a by-product and is withdrawn from the system.