Heavy naphthenic base oils essential tools for the lubricant blender

Industrial lubricants which are based on high viscosity nbase oils, support a very important lubricant market segment. In essence, large machinery where rotational or sliding speed is low, will increasingly depend on high viscosity lubricants, to create load-carrying ncapacity in bearings and gears.
Moreover, this application applies to a wide variety of industrial lubricants. Global Group I base oil production is gradually shrinking, and production of low viscosity base oils for the automotive industry is expanding. This trend is resulting in the urgent requirement for an improved understanding,
from the perspective of the industrial lubricants manufacturer, of how base oils with a very high viscosity can be made available for secure supply, over the long term.
Applications where high base oil viscosity is desirable

How to make very high viscosity base oils
Naphthenic base oils with a particularly high viscosity can be straight run oils, blends of different base oils, or blends of base oils and Viscosity Index Improvers (VII). For example, a combination of a N 500 SUS Group II oil, and a heavy naphthenic oil, would result in a similar viscosity, Viscosity Index (VI), and solvency, to a typical Group I and Paraffinic Brightstock blend, frequently applied in formulations for industrial lubricants.

Table 1 (below) shows eight (8) different VI Improvers, which were investigated. Six (6) of these were used as stock solutions, prepared by adding varying amounts of solid or liquid VI Improvers to NYNAS T 22 as the carrier oil, resulting in solutions with a viscosity of between 8300 and 8900 cSt. The solid EPCP polymers require the lowest treat rate concentration to obtain the desired kinematic viscosity. Two bio based plasma-polymerised high viscosity base oils (unaltered) were also included.

The eight different VI Improvers were added to either
NYNAS T 110 or NYNAS T 400, at 1-5%, 10%, and 15% treat
rates. The Kinematic Viscosity (KV) and Viscosity Index of
the resulting solutions were then plotted, in order to analyse
the results. See Figure 1 (below), for one example:
NYNAS T 110 at 40 °C.
Since the stock solutions have a similar viscosity (ca.
8500 cSt), the results are easy to compare across the range
of significantly differing VI Improvers. For example, Figure 1
clearly demonstrates how much VI improver would be required
to blend T 110 into a VG 220 or 320 base oil. 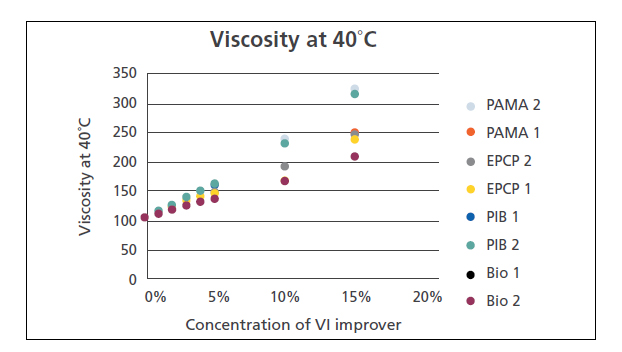 Nynas also noted the following when conducting the study:

The addition of VI Improver stock solutions results in similar influence trends when applied to both NYNAS™ T 400 and NYNAS™ T 110
The PAMA and PIB adjusted blends yield the highest viscosities
The rate at which viscosity increases for both 40°C and 100°C, is greater at a high VII concentration
Conversely, the rate of change of the VI value decreases at a high concentration
The relative influence on the viscosity at 100°C is greater for NYNAS™ T 110 than NYNAS™ T 400

To conclude, NYNAS™ heavy naphthenic base oils, such as T 110, BT 150, T 400 and BBT 28, are available currently, and far into the future. These products are produced within the Naphthenic base oil trains at Nynas, entirely independent of the rapidly diminishing Group I heavy SN and Brightstock production.

We have demonstrated how Viscosity Index Improvers can be added, to create blends with a much higher viscosity and VI. Furthermore, as our study illustrates, when created, these super high viscosity fluids return predicable results and controllable outcomes. Blends of VI Improvers with NYNAS™ naphthenic base oils, and asphaltenic fractions, make additional high viscosity options, and the considerable benefits these bring, available to the formulator of finished lubricants, both now and in the future.