The Ordinary General Assembly Meeting of the Petroleum Industry Association (PETDER) was held in Istanbul Hilton Bosphorus Hotel on March 18, 2021 with all necessary health and safety precautions. At the Ordinary General Assembly Meeting, PETDER's activities in the previous period and its budget for the last 3 years were presented to the approval of the General Board, and members of the Board of Directors and Supervisors were elected.

Opening speech of the meeting was made by Selim Şiper, who has been the Chairman of the Board of PETDER since April 2018. Stating that PETDER has been representing the fuel industry for 25 years not only as a reliable and objective source of information, but also as an effective advocate, Şiper said that the Association represents approximately 85 percent of the market and continues to work with the aim of providing better fuel, services and products to more than 24 million vehicles all across the country.

Şiper indicated that the ongoing pandemic is the most important development in the world and the sector in his term, and noted that the pandemic has affected the fuel distribution sector very negatively, and the study conducted by PETDER in collaboration with PwC revealed that it caused a loss of approximately 1 billion TL in the sector. Şiper said, “As PETDER, we evaluated the effects of the developments and practices in various platforms on our industry and offered relevant solutions. In addition, we have taken steps to expand our communication channels based on coordination and cooperation by strengthening our relations with our stakeholders and we have observed its positive results.” 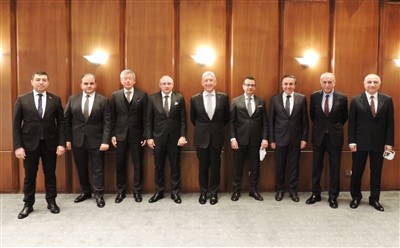 Turkey exported a total of $574.1 million in September 2021 according to the export figures of the mineral oils and mineral fuels sector prepared every month by IKMIB using the ...

Automechanika Istanbul begins today after a break of 2 years

After a long break of more than 2 years because of the pandemic, Turkey’s Leading International Trade Fair for the Automotive Industry, Automechanika Istanbul Plus has begun ...

Turkey’s leading industiral company, Tüpraş, announced the financial results for the third quarter of 2021. Tüpraş accelerates its sustainability investments in ...

TotalEnergies reported that its new generation grease product group, Ceran, will meet the high performance requirements of equipment in industries such as iron & steel, cement, ...

Formula 1TM, one of the world’s most important sporting events, will be held in Intercity Istanbul Park once again as part of the 2021 schedule. Following the agreement ...

The Ordinary General Assembly Meeting of the Petroleum Industry Association (PETDER) was held in Istanbul Hilton Bosphorus Hotel on March 18, 2021 with all necessary health and ...

BorgWarner, a world leader in clean and efficient technology solutions for internal combustion, hybrid and electric vehicles, continues to expand its aftermarket product range in ...

Tüpraş, prioritizing customer satisfaction at every step, continues its efforts to meet the demands and expectations of its customers at the highest level and in the fastest ...

With nearly 350 products that it develops and produces, Petrol Ofisi provides ideal solutions for almost all needs in Turkey in the lubricants field under one roof. The company ...

The agreement signed between Petrol Ofisi, the leader of Turkey’s fuel and lubricants sectors, and Chevron, one of the world’s leading oil and lubricant companies, ...