Naphthenic base oil outperformed par­affinic base oils in an investigation into the emulsion stability of metalworking fluids. Professor Thomas Norrby outlines the implications for formulators of fluids.

“We tested the stability of metalworking emulsions made with several different base oils, and the emulsions made with naphthenic oil were clearly more stable than those made with paraffinic oils,” says Pro­fessor Thomas Norrby, Senior Technical Advisor for Naph­thenics at Nynas.

Until recently, paraffinic Group I base oils were the traditional choice of manu­facturers of metalworking fluids in some markets. But with the threat of shortages hanging over the industry, due to the global decline in Group I capacity, the chase is on to find suitable replacement oils. And as the third wave of Group I refinery closures is about to hit Asia, the Middle East and Africa, Thomas Norrby sends a stark message to formulators:

“Whatever you do, don’t be tempted to use Group II oils in your products!”

The reason for his advice is simple; Group II oil fared particularly poorly in Norrby’s emulsion stability study, the oil was outperformed not only by naphthenic oil but also by Group I and Group I replace­ment base oils.

Intended to be used as a component selection guide for formulators of metalworking fluids, the study identified solvency, expressed in the aniline point, as the key base oil quality. Norrby and his Nynas colleagues used the droplet size as an indicator of emulsion sta­bility – as smaller droplets make more stable emulsions. Two complementary methods for determining droplet size were used and yielded comparable results. The influence of water hardness was also assessed, and was found to play only a minor role in non-ionic surfactant systems, but had more impact in anionic semi-synthetic emul­sion systems. 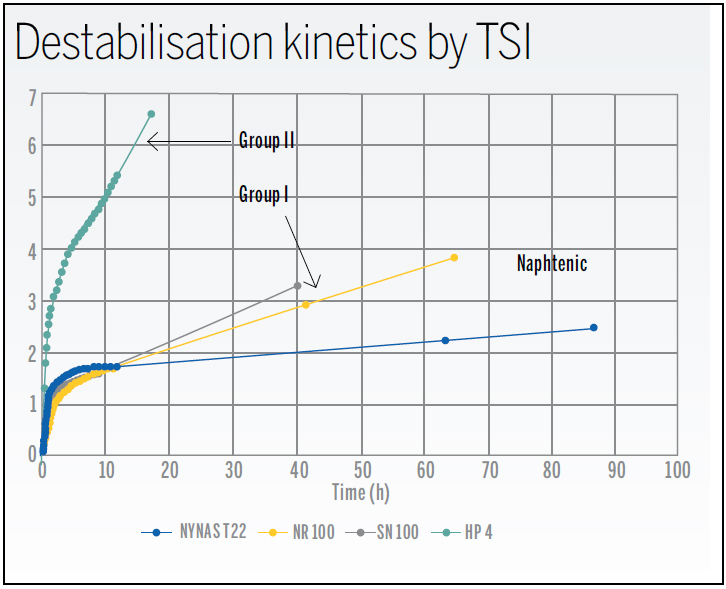 Two methods - droplet size distribution and light scattering/ transmission - were used to study the emulsion stability. The thick­ness of the emulsion phase was determined by light scattering at different time intervals using a Turbiscan instrument, measuring actual concentrations. The Turbis­can Stability Index (TSI) was used to characterise the stability of the different emulsions.

The researchers were able to establish a preferred value for the Hydrophile -Lipophile Balance (HLB) for each base oil type, where the optimum conditions for emulsion stability were found. This HLB value was found to be about two units higher for the naphthenic base oil compared with the paraffinic Group I and II base oils. However, under these conditions, the naphthenic base oil system displayed better drop­let size and stability.