“We wanted to investigate how the formulation of lithium and lithium complex greases can be optimised using tribological tests, and also to study the influence of different naphthenic oils and additives”, says Nynas Senior Development Engineer Dr. Jinxia Li.

The results suggest that by running various tribological tests the formulation of grease can be optimised further, resulting in more cost-efficient solutions. However, the results also reveal how important it is to carefully select relevant test methods when simulating conditions of applications in the field. Jinxia Li and her colleagues discovered that different test methods can provide different data, which may lead formulators to draw the wrong conclusions.

A step-by-step investigation was devised to study the behaviour of lubricating grease in different tribological contacts. An intensely discussed topic for many decades, it is also known that a vast number of material related parameters have significant impact on the tribological behaviour of grease. The type and amount of thickener, the type and viscosity of the oil, and the type and concentration of additives are also directly related to the cost of the formulation.

Lithium and lithium complex thickeners were chosen for the study as more than 75 percent of the global grease production is based on these two thickener systems. Three naphthenic base oils of different viscosities (150, 375 and 600 mm2/s) were used in the experiments as well as two additive packages, both consisting of antioxidant, anti-wear, and extreme pressure components, one of them with an extra dose of extreme pressure additive.

“Our aim was to evaluate the impact of the characteristics of the base oils, thickener type and additive concentration tribologically by using various SRV methods as well as four-ball methods,” explains Jinxia Li. 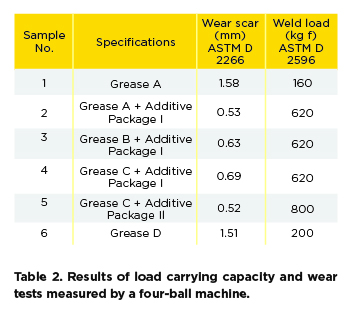 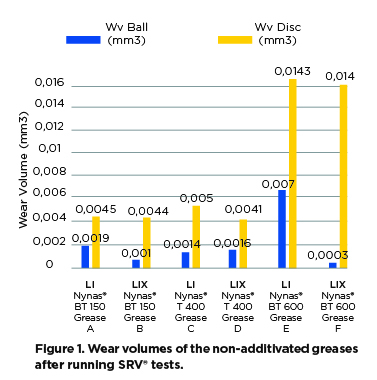 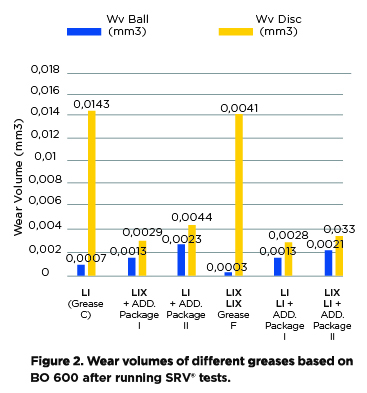 In the SRV tests, wear values increased for both disc and ball with extra extreme pressure additive regardless of the thickener type for greases based on the naphthenic oil of the highest viscosity, see Figure 2. The four-ball tests showed positive impact both on the wear scar diameter and weld load carrying capacity for the lithium grease (C). For the lithium complex grease (F), only the load carrying capacity showed a positive effect, see Table 2.

“From Nynas’ point of view, the most important finding of this study is the fact that the thickener content of a grease seems to affect the tribological performance which in turn is dominated by the characteristics of the base oil, for instance, its polarity, degree of solvency and viscosity,” says Jinxia Li. 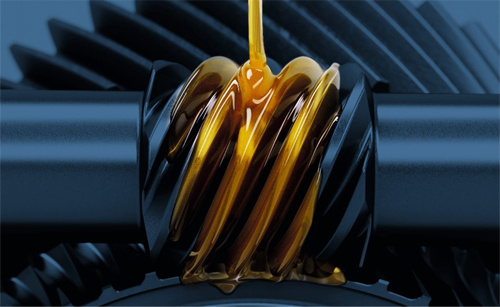 The tribological properties of all formulated greases were studied by using various ASTM methods in the new generation tribometer SRV®5 and a traditional four-ball set-up. These tribological investigations proved crucial for optimising the grease formulations for specific tribological contacts.

However, they also highlight that the choice of test method matters, exemplified by the differences observed between the two thickener systems in the additivated greases, where the additive package containing an extra dose of extreme pressure additive performed differently in the two test rigs.

Studies conducted at Nynas’ specialist grease lab and Optimol Instruments in Germany show how tribological tests can be used to optimise the formulation of lithium and ...

In a comparative study, Nynas researchers conclude that a heavy specialty oil is a viable alternative to bright stock in grease formulations. It is cost-effective and offers ...

Engineering Lubricants for an EV-Driven World

As more EVs enter the market, how manufacturers develop the fluids that will protect them will become ever more critical By Amanda Eastwood and Suzanne Patterson Vehicle ...

Cutting-edge lubricant technology can offer big benefits for all stakeholders in the value chain. Here’s how to make the most of it and build stronger relationships with ...

Options in Group I replacement strategies with naphthenics?

Group I base oils are solvent-refined base oils with a viscosity index range of 80 to 120. They have long been the cheapest base oils on the market but have shown considerable ...

The importance of DGA test in transformer condition

Sustainable lubricants and recycled base oil